Mika Rottenberg’s (* 1976 Buenos Aires; lives in New York) film installations explore the seduction, magic, and desperation of our hyper-capitalistic, globally connected reality. Female workers produce goods in strange factories that follow elaborate manufacturing rationales. Rottenberg’s cinematic works, which have a surrealistic aesthetic and are rigidly structured in a spatial sense, emphasize the interrelation between labour, economics, and the production of value, and how our affective relationships are increasingly monetized. The artist weaves documentary elements with fiction to create complex allegories for the living conditions experienced within our global systems.

Strategies of cooperation, appropriation, and compilation are characteristic of Cosima von Bonin’s (* 1962 Mombasa; lives in Cologne) mixed-media installations. She navigates the viewer through a sea of references with her subtle humour, bringing influences ashore without any apparent effort and involving artist friends and historical perspectives in her exhibitions. Energized by Conceptual Art and Pop Art, her work keeps touching on key figures like Martin Kippenberger or Mike Kelley and makes countless references to cinema, literature, music, fashion, design, and lifestyles. In this way, her artwork presents itself more as the result of traditional tendencies, networks, and recurrences than as an original, individual artistic gesture. The large-scale arrangements, often in the form of animal motifs, mirror the conventions and rules of the art world and address von Bonin’s artistic identity within a network of relationships, dependencies, and role models. 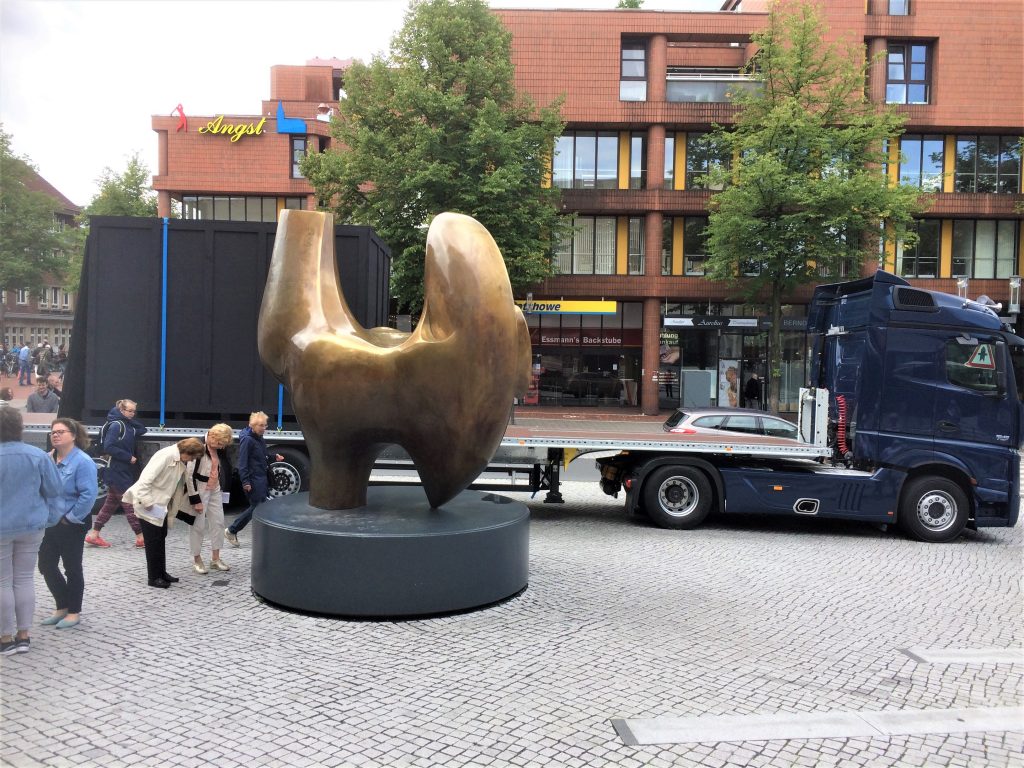 Sany’s work Marginal Frieze for the Skulptur Projekte links two different areas. On the one hand, a multi-part mural is being exhibited in the urban space, while, on the other, his cartoons are part of the exhibition’s accompanying advertising campaign: his work is being circulated as film trailers, on banners, bags, flyers, and stickers—as a patchwork of subliminal media fragments with a wide range of influence in the public space. For his Fallande ting Sany is installing large-sized pyrographies on the walls of several buildings in Münster and Marl, showing individual falling figures. For this project he turns to familiar characters from his cosmos of images: with Estrid, the Valkyrie, and Yggdrasil, the World Tree, he re-interprets two figures from Nordic mythology, who are joined by the monkey Apis and the Greek artist Stavros.

For Skulptur Projekte, Peles Empire has erected a gable, nearly eight metres high, in the immediate vicinity of the city’s historic centre. The gable’s tiled façade shows an image of the castle’s crumbling terrace as well as the supports that keep it from collapsing. The façade is braced by poles and propped against a stepped volume, whose surface is covered with black-and-white streaks, mimicking a stone surface. This surface visually anticipates the Jesmonite bar inside. Both are black and white and thus create the effect of a photocopy. The object, which is located in a carpark, is not just for viewing from the outside—it can also be entered. The first impression suggests some intrinsic value, but this is misleading: what looks magnificent and solid from the outside turns out to be a print pasted on a sheet of thin aluminium-based material. The size of the tiles and the stepped element behind the façade were based on the size of standard A3 paper. This and the black-and-white imagery are a clear reference to the technology of photocopying where every copy increasingly becomes an abstraction of the original.

Youmbi’s installation is located in the disused Überwasser cemetery, near General Ludwig Roth von Schreckenstein’s grave. Suspended among the trees, four massive masks appear to hover some ten metres from the ground. Another four, smaller masks are mounted directly on the trees. Les Masques célèstes incorporates iconography from popular Western capitalist culture: immediately apparent is the Ghostface mask—from the American horror film Scream (1996)—which was in turn inspired by Edvard Munch’s 1893 painting. This icon of fear is juxtaposed with animistic tokens from many traditional African cultures. According to Youmbi, these animate the spirits of the dead by inviting them to enter and possess the masks during celebratory ceremonies. Youmbi commissioned the masks from workshops in Cameroon. His intervention at a Christian burial site, a location for the commemoration of the dead, raises questions about religion, spirituality, and superstition. Youmbi’s work highlights the objects and the sites where we make connections between this world and the hereafter and examines what parameters are used to decide whether these customs are valid, effective, or authentic.

Baghramian chose one of the top locations in Münster for her work Beliebte Stellen / Privileged Points: the Erbdrostenhof (a baroque palace built by Johann Conrad Schlaun in 1757). In the palace forecourt she has placed an elegantly curved bronze landmark, consisting of three slender but heavy, interconnecting elements. They are held together by visible clamps and propped up in a few spots on the courtyard’s cobblestones. The open circle, measuring a diameter of approximately five metres, is explicitly interrupted by the dimensions of the objects, whose bronze casting makes for an optimal result. In the palace’s rear courtyard (which can be accessed from the St Servatii church square), six similar sculpture elements are piled up and can be used to assemble two more Beliebte Stellen / Privileged Points. 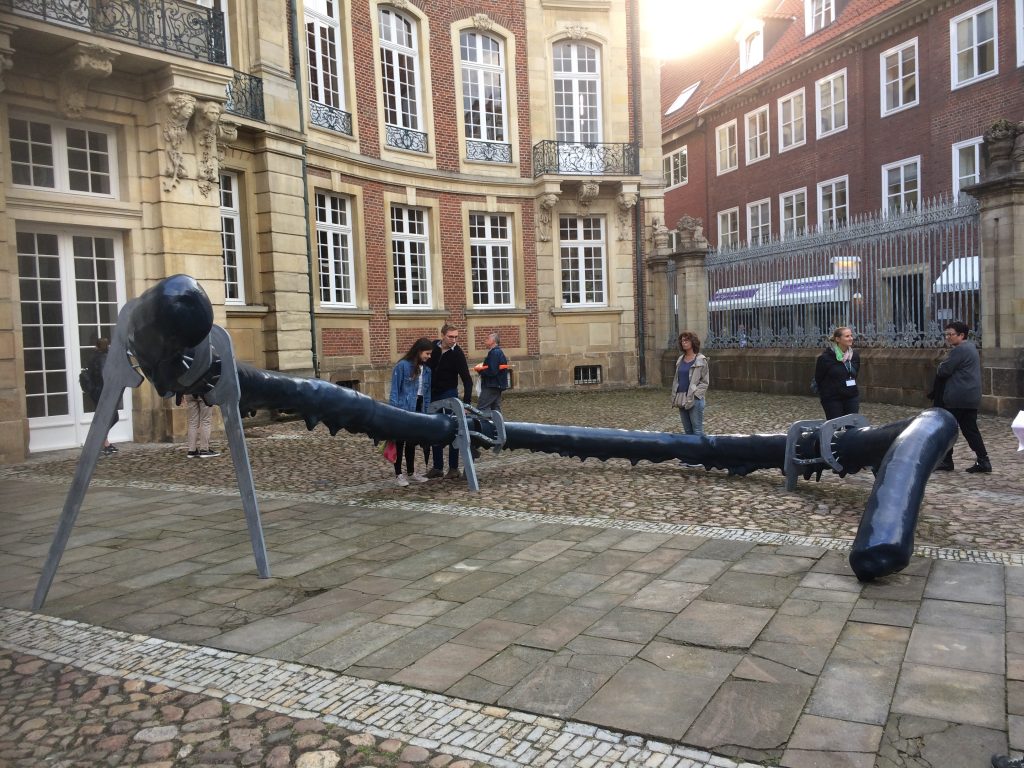 END_OF_DOCUMENT_TOKEN_TO_BE_REPLACED

Justin Matherly finds the visual prototypes for his sculptures in books and writings, especially in philosophical texts and the ancient classics, which he refers to both in form and content. In many cases, he even names them specifically in his titles. His porous and often fractured sculptural interpretations made of cement, plaster, and plastic are supported by medical walkers. His work is complemented by photographs that are closely linked to the objects.

Matherly’s sculpture on the grassy area along the promenade looks as if it had fallen from the sky. The surface of the material exhibits cracks and holes in many places. The walkers clearly protrude in some spots and in others completely vanish inside the grey material. As ready-mades or everyday objects, they assume the function of a pedestal and also become part of the sculpture. In the artist’s conception, these objects introduce a scale that is closely related to the human body. Some of the walkers used in this sculpture are no longer new and come from the wider Münster area. Despite its massive presence, the sculpture emanates a lightness, appearing to hover above the earth. 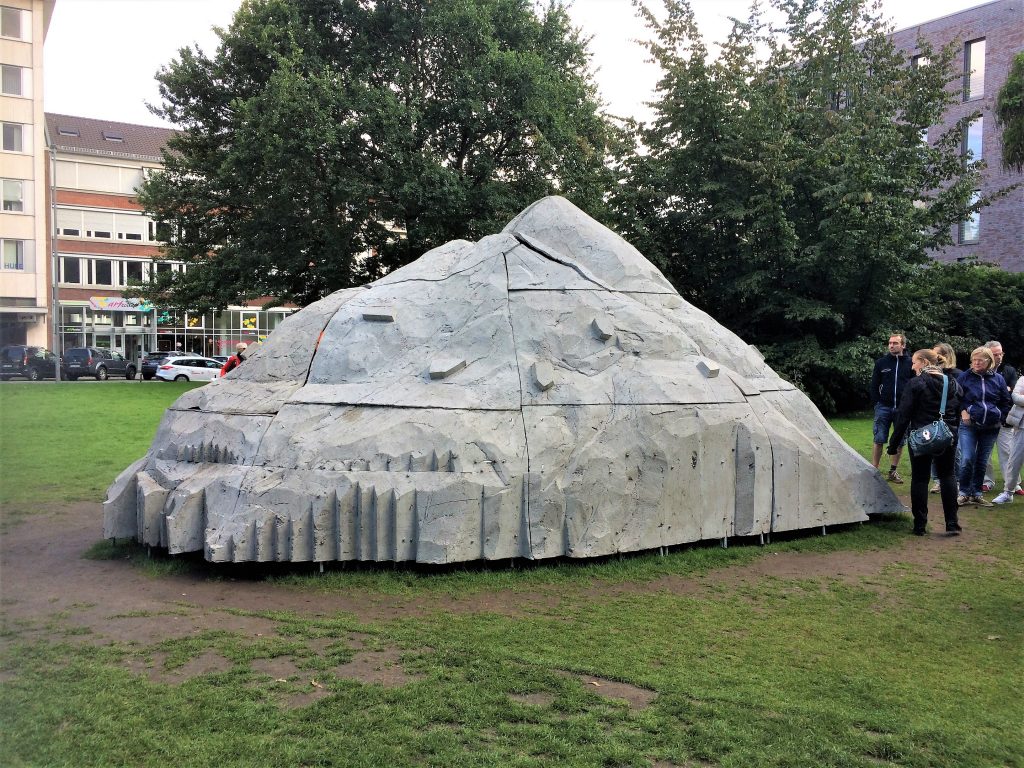 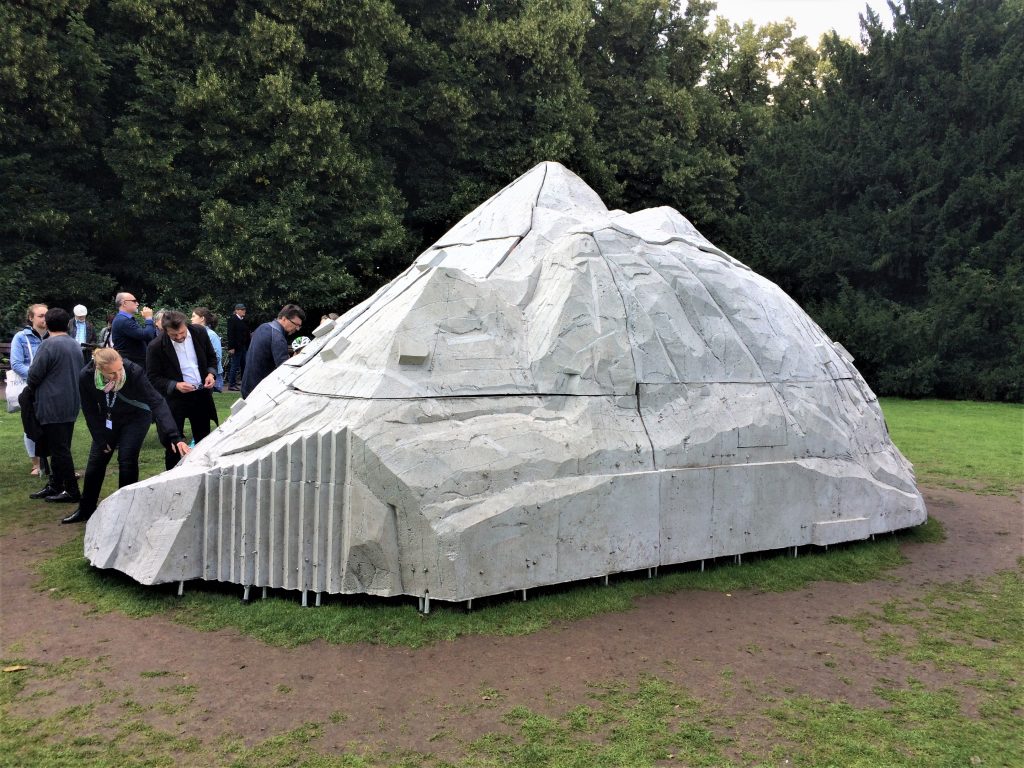 For Skulptur Projekte 2017, this series will be continued on the Promenade and in the neighbouring town of Marl, in each case with a hollowed-out granite boulder. At first sight, the four-metre-high stone seems to be an alien object or a glacial erratic. And yet, when you circle the boulder, it is evident that it was wrought by hand, which raises questions as to its function. There is a little slot that money can be dropped into. At the end of the exhibition the stone will be destroyed, the resulting gravel reused, and the collected money donated to charity. The artist has decided to give the money to the organization Hilfe für Menschen in Abschiebehaft Büren e. V. (offering help to people facing deportation).

Apparently a more sculptorical work, but much more. Fully integrated beside tha Promenade, could be left there, but this won’t happen. In fact it is a sort of huge piggy bank in order to collect money for political refugees. A bright idea from this italian artist. 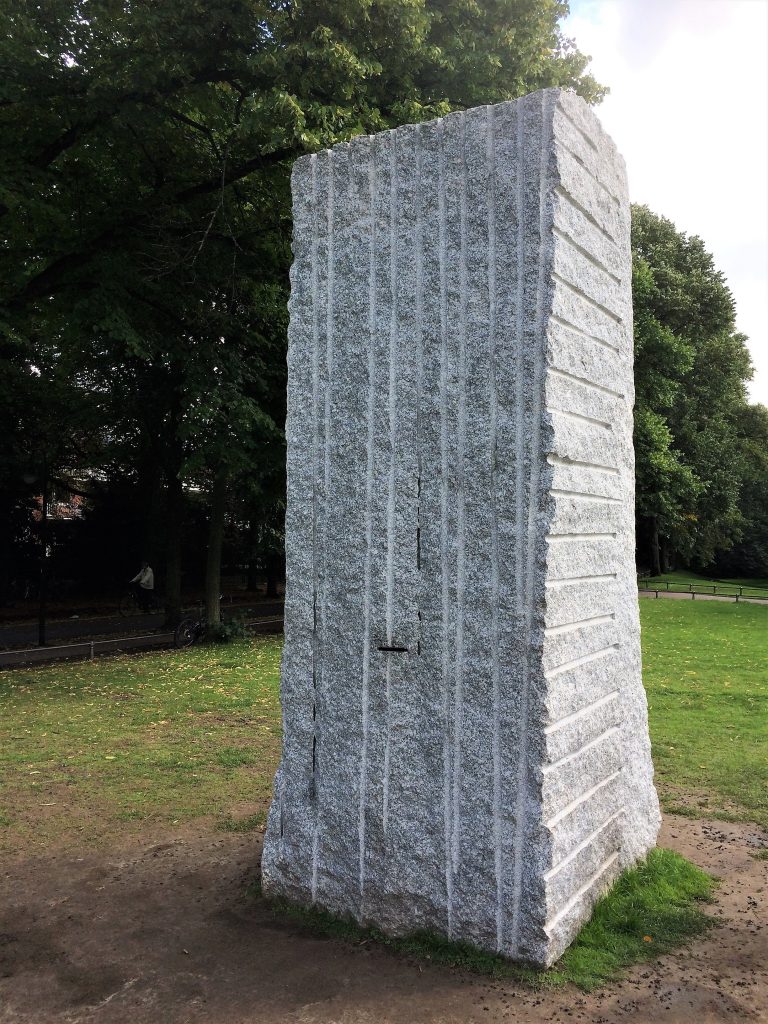 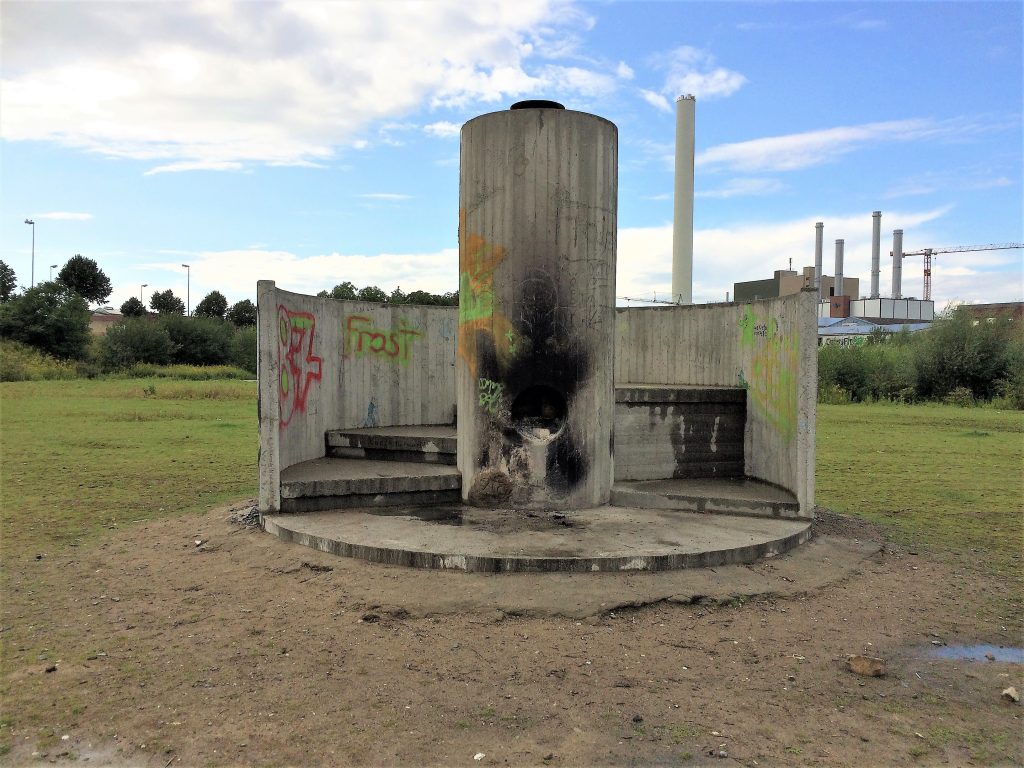 END_OF_DOCUMENT_TOKEN_TO_BE_REPLACED

Christian Odzuck (* 1978 Halle; lives in Düsseldorf) takes as his focus architectural fragments as well as urban building processes. His basic artistic approach is the reuse and further development of building materials, which he reassembles as accessible structures. Original buildings and individual elements, reused materials, or the memories thereof are visible and aesthetically tangible for visitors.

The point of departure for his piece is Münster’s former revenue office, the Oberfinanzdirektion (OFD) building, demolished in 2016/17.

Built in the 1960s from plans developed by the architecture firm HPP Heinrich-Petschnigg & Partner.

Odzuck placed his work OFF OFD on the now abandoned space. Getting his bearings from the clear, modern use of form in the now demolished administrative building as well as from its former dimensions and floor plan. The centrepiece of the work is the stairway, which is conspicuous in an architectural sense. Originally, it was at the main entrance of the OFD. But Odzuck reconstructed it as a mock-up, imitating its function as a walkway yet expanding it from a conceptual and structural point of view. He recycled the demolished building’s materials as a ballast bed and added on modular prefab concrete bricks made of leftover cement from previous building projects. In addition to this, the artist translocated and reactivated the 23-metre-long street light from the OFD car park.