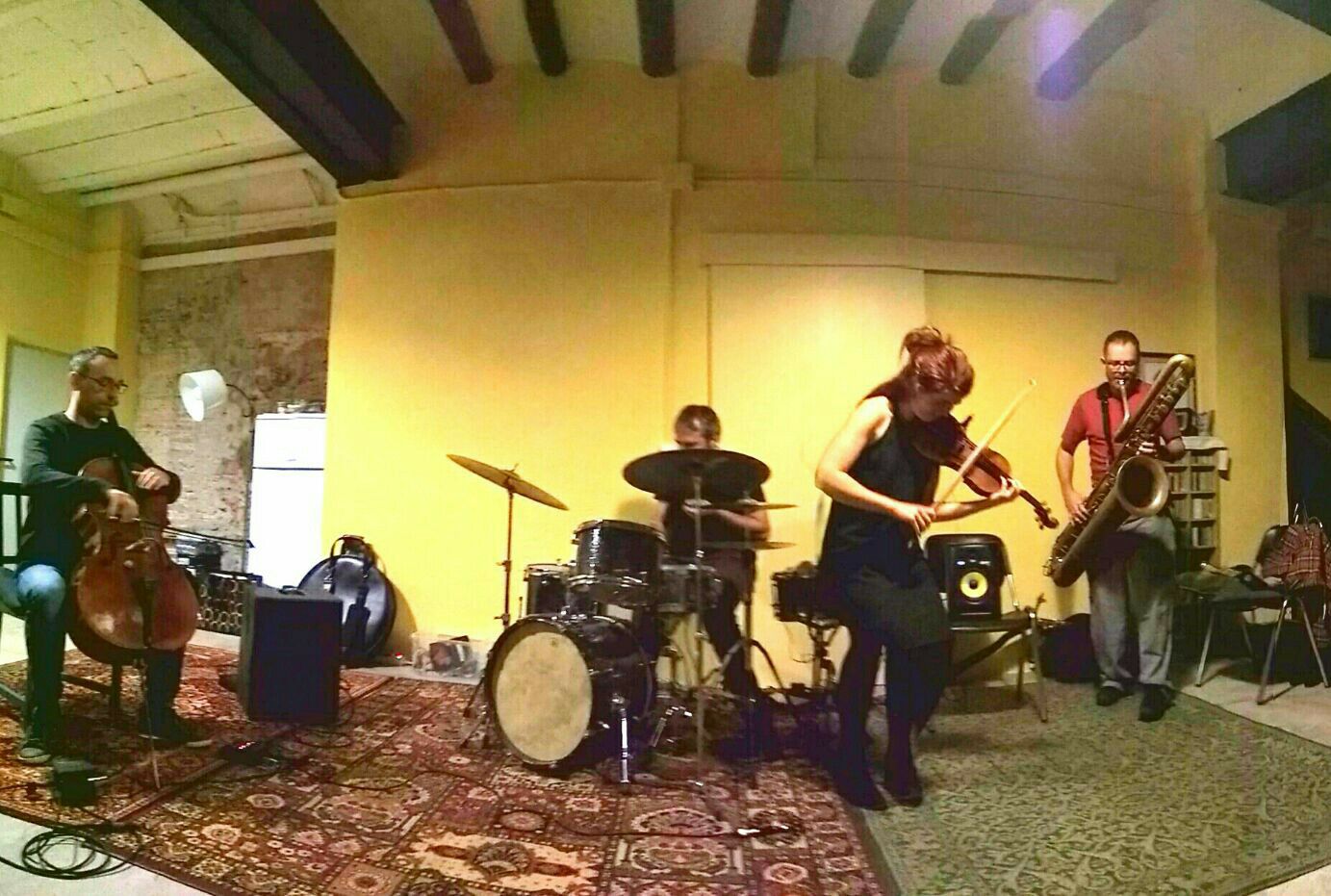 Freenètics is an intuitive and fully sustainable portable improvisation project: the trio made up of Ferran Besalduch (bass and sopranino saxophones), Joan Antoni Pich (cello) and Pep Mula (drums) bond together the different elements from their own backgrounds: from free jazz to the most electric rock by way of contemporary music, in keeping with the nature of the space where they’re playing. An exercise in pure musical symbiosis that plays with apparently irreconcilable sounds they extract from their instruments to give them a fresh and at times unlikely twist. Freenètics is a clear example of the concept of evolution: eager exploration, adapting to the environment and unexpected mutations. Presented in 2009 at the LEM Festival in Barcelona, the trio organizes since 2014 its own series of improvisation sessions at the Studium Badalona, where they have performed with artists of the international improvisation scene like the dancers Constanza Brncic and Sònia Sánchez, drawing artist Joma and musicians Joachim Badenhorst, Agustí Fernandez, Jacob Wick and Nuno Rebelo among many others. Last year they where invited to take part in festivals like ‘Escucha errante’ in Bilbao and Multiversal in Oslo.

Violinist ABOUT New Zealand violinist, Sarah Claman, graduated with a MusB(Hons) in 2011 from the University of Otago (Dunedin, NZ). After completing an exchange to Dartington College of Arts (UK), she discovered a passion for performing contemporary compositions and free improvisation. She went on to study at the Escola Superior de Música in Barcelona, where she formed part of the String Quartet Moana and is currently based in the Netherlands where she performs regularly with Duet Claudàtor and as an improviser. Review from Sarah’s performance of Haydn’s C Major Violin Concerto with the Dunedin Youth Orchestra: “Stamps and cheers from a full house rewarded violin soloist Sarah Claman and her strong and energetic interpretation of Haydn’s Violin Concerto No 1 in C. Virtuostic challenges, double stopping, melodic leaps, triplet rhythms and chromatic shifts in the romping Presto and the dancing Allegro Moderato movements were met with steely assuredness. The Adagio was performed with a powerful sense of lyricism, majesty and calm. Claman is indeed a fine young musician and gave a thrilling performance.” -ODT 24 September 2009 Review from the inaugural performance at the BCN Impro Fest 2016: “A collision of delicate fragments – Lai’s piano conjures up spring rain, Schneider’s non-verbal acrobatics are awe-inspiring and playful in equal measure, the scraping of Claman’s strings raise the hairs on the arms (mine, not hers as far as I know), and Vega’s flute provides an almost-not-there bubbling undercurrent. There’s an easy randomness at work here alongside an atmosphere of close attention and deliberation; indeed, some of the most effective moments are when voice and flute briefly merge into a single rich sound.” – A Jazz Noise 9 February 2016